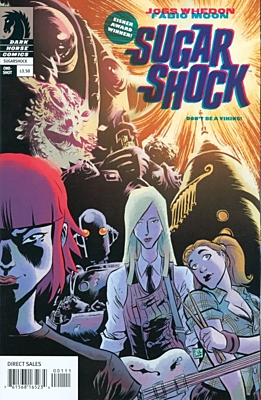 Originally presented in the first online issues of MySpace Dark Horse Presents, for which it won the Eisner Award for Best Web Comic, Sugarshock tells the story of a rock band led by charismatic but crazy Dandelion Naizen, a hyperactive singer/songwriter possessed of a mean hatred of Vikings (don't ask) and a mission for a secret government agency that may only exist in her head. But when her band, which includes a robot bass player, is enlisted in an intergalactic battle of the bands-emphasis on battle-Dandelion gets to prove herself as both singer and soldier. This is Joss Whedon at his funniest and most hyperactive, with writing that bursts off the page in a way seldom seen in comics. Multiple Eisner Award winner Fábio Moon delivers the outrageous story with equal energy, as well as providing a fourteen-page look at his process, with never-before-seen character designs, page layouts, and promotional images. Joss Whedon's Eisner award-winning story gets its own comic!