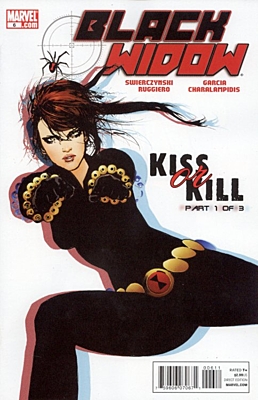 Kiss or Kill
New readers, jump aboard here! Duane Swierczynski and Manuel Garcia kick off a new era for the super-spy Avenger known as Black Widow! A senator is seduced and assassinated...and his journalist son follows the trail to a fatally sexy Soviet agent. This deadly 'woman in black' moonlights as a high-class escort to lure powerful men into her web of blackmail and death. But Nick Crane believes he's finally found his father's murderer, and he's about to expose...the Black Widow!