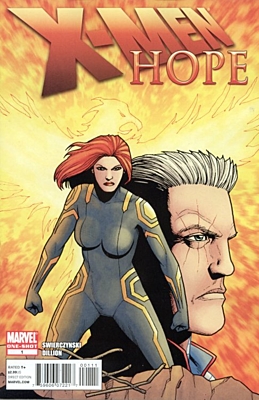 A Girl Called Hope
Hope Summers could be the much-heralded 'messiah' who will save mutantkind from extinction...or she could just be some poor kid, caught in the wrong place at the wrong time(s). Either way, since her infancy she's been raised by mutant soldier Cable in a hostile, dying future Earth -- and she's had to learn some hard lessons along the way. Now, Duane Swierczynski and Steve Dillon bring you four thrilling, untold tales from Hope's future past as she grapples with vicious snipers, robot wolf packs, mutant rats, and even Cable himself. This is the place to start if you want to know what the X-Men's future 'messiah' is made of. Reprinting the four back-up stories from Psylocke (2009 Marvel) #1, Dark X-Men (2009) #1, X-Men Legacy (2008 Marvel) #230 and X-Force (2008 3rd Series) #22. For the continuation of this tale, check out "Homecoming" in Cable (2008 2nd Series) #21.