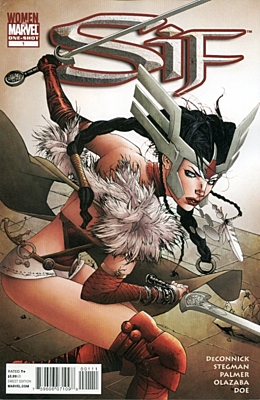 I Am the Lady Sif
The Asgardian warrior Sif was no stranger to battle; the heft of steel, the pitch of combat, the spray of an enemy's blood...she even craved it. But when Asgard and its people made their glorious return through the power of Thor, Sif's body was stolen and possessed by crafty Loki. Cowed by such defilement, Sif hasn't been her true self...until a former lover and mate in arms comes to her with a call to battle and blood-spattering adventure...Now Sif sets out with Beta Ray Bill to fight her way back to true warrior's glory!