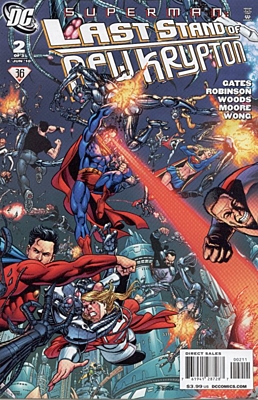 Last Stand of New Krypton, Part Five: Bottles and Battles
Things look bleak for the Kryptonians as Brainiac reveals his trump card for destroying the planet, leaving Zod grasping at straws as to how to defend his people. But Superman and the Legion of Super-Heroes have made it aboard Brainiac's ship, determined to stop the tyrant at any cost! Over a year's worth of New Krypton stories has been building up to the final page of this series, and once you see it, you'll know there's only one outcome: the WAR OF THE SUPERMEN!