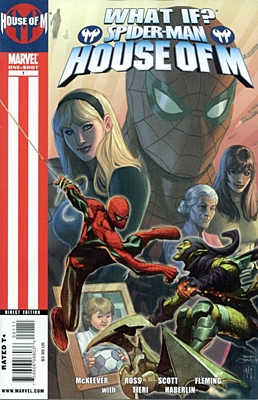 Comics (EN) sešity
006575
Marvel
Skladem
115 Kč
Gwen Stacy meant everything to Peter Parker...and then she was gone, murdered by the Green Goblin. When the Scarlet Witch shifted reality in HOUSE OF M, Peter got to live the dream of marrying Gwen and raising a son...but soon that, too, was gone. But what would happen if Gwen didn't vanish along with the rest of the HOUSE OF M? In other words, WHAT IF GWEN STACY SURVIVED THE HOUSE OF M? In the first feature, questions about what would happen between Gwen and Peter, between Peter and Mary Jane, and, indeed, what would happen to reality itself are answered as only Sean McKeever (Teen Titans) can. Joining him are Dave Ross (AVENGERS WEST COAST) with paints by Jorge Molina (X-MEN: MANIFEST DESTINY - NIGHTCRAWLER). Guest-starring THE NEW AVENGERS, DOCTOR STRANGE and VILLAINS GALORE! In the second feature, Peter Parker returns home from the House of M reality -- but he's not alone. Gwen and Richie have made the trip as well -- along with something far more problematic. Far more sinister. And it will threaten to destroy not only himself and his loved ones, but everything Spider-Man stands for! 'WHAT IF GWEN & RICHIE PARKER EXISTED OUTSIDE OF HOM?' by Frank Tieri (EXCALIBUR) and Brian Haberlin (Spawn). Plus a 'SAY WHAT?' comedy strip by Mike Gallagher (Mad Magazine) and Dave Manak (Spy Vs. Spy).