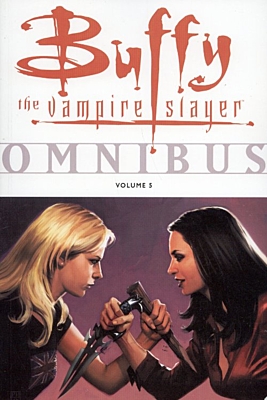 Volume Five picks up with the destruction of Sunnydale High in Season Three of the television series, and goes straight into the college years. Buffy TV writer Jane Espenson and longtime Buffy artist Cliff Richards join forces with "Haunted," in which Faith lies in a coma as the Mayor's ghost plagues Buffy's dreams. This collection includes the five-issue arc titled "The Blood of Carthage," by novelist Christopher Golden, and chronicles the start of Buffy's romance with Riley Finn and Anya's reintroduction into Xander's life. The book concludes with Oz's travels away from Sunnydale, where he learns about his origin and how to control the wolf inside him, all so he can return to the woman he loves.