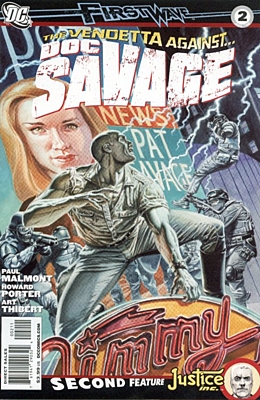 'The Lord of Lightning' continues as Doc Savage and his compatriots dig themselves out from last month's brutal attack on their homes - but in accepting help from Doc's phenomenal sister, Pat Savage, have they made her a target as well? Written by Paul Malmont, New York Times best-selling author of The Chinatown Death-Cloud Peril, with art by Howard Porter (JLA)! And in the JUSTICE, INC. co-feature written by crime novelist Jason Starr (THE CHILL), Richard Benson and his team of detectives come face-to-face with the dark secrets of their kidnapped friend - and the grief of his family!