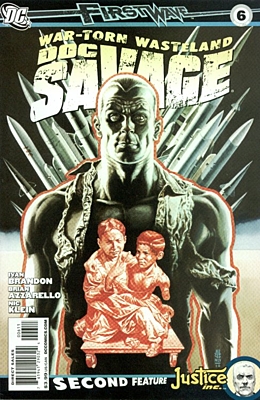 First Breath After Oblivion
Murder and Vengeance, Part 1: The Assassin

The US government has offered Doc and his men a deal: run a secret mission in the war-ravaged, blockaded ruins of the Middle East, and they'll wipe the slate clean of the frame-up job that the Secretary of State ran on them. Doc Savage is nobody's errand boy - but if the mission involves saving the life of one of his former compatriots, he might just have to cut a deal with the men who set him up! Eisner Award-winner Brian Azzarello joins Ivan Brandon for the start of a six-part epic that reveals the most dangerous corner of the FIRST WAVE world!