CizojazyčnéComics (EN) sešityEN - Welcome to Tranquility: One Foot in the Grave (2010) #1A 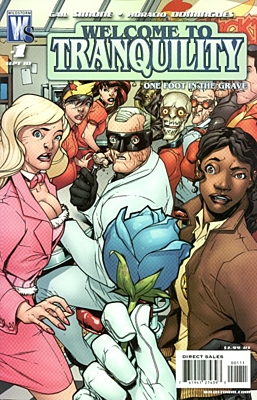 Homecoming Part 1: A Shot at Redemption
The fan-favorite series from Gail Simone returns as Sheriff Thomasina Lindo and the town of Tranquility's unique inhabitants face a new crisis: the return of Mayor Fury from prison! Following the cataclysmic events in the previous series, Mayor Fury faced a trial for murder and was acquitted when the star witness refused to testify. Now he's free and wants to come home to the town he loves, but a powerful foe from his past has other plans for Fury - and the entire town! Acclaimed writer Gail Simone (WONDER WOMAN, BIRDS OF PREY) and artist Horacio Domingues (WILDCATS: NEMESIS) spin a new tale from the wondrously small town populated by larger-than-life superhuman citizens!

Další tituly ze skupiny: EN - Welcome to Tranquility: One Foot in the Grave (2010)